I had the pleasure of going to see Angel of Mars at the Hamtramck Music Fest last night. Sometimes for me music is purely emotional. Sometimes its all thought and other times its spiritual. This show was all three of those things. I was able to catch 3 bands at the Sanctuary but I'll get to that in a moment. With music there are so many things to know about. From theory, to gear, to who has played with who in which bands and which recordings etc. Its all interconnected in intricate patterns. One of the guitarists in Angel of Mars played the intro and outro for the very beloved Sample the Martian song: Box at the End. (Thank you everyone who enjoys that song). That would be Andy Gould playing a PRS. His wife, Terrianne Gould is on vocals, and guitar (playing a Gibson SG). Rich Hartwick who also plays in a band Rabbit Ears is on bass (Plays an Eastwood) and Angelina Manly (who played with Broadzilla). When I walked in they were doing their sound check and Angelina was playing some massive blast beats. It was a treat for me to see that. I didn't get a sense that she was showing off on purpose - but it was amazing. It takes a lot for a drummer to really grab my attention. Not just speed and accuracy but also feelign and diversity. I don't know for sure but I'd guess that she could rip out something in 13/16 time like it was nothing and make it sound like it was as natural as 4/4.

The set was great. If you are familiar with subgenres like doom, stoner, sludge - its definitely that. There are also some really great time shifts and tempo changes. The grooves are solid - the layers make it really shine. There is a lot to disect. Its a unique take on these elements and I'd definitely recommend checking them out live when they play in October - but also hunt down their songs as they become available. I'm positive that they knew that their final song was a crowd pleaser. It definitely left us wanting more. Here is their setlist.

1. Solstice rising
2. Siren in Scorpio
3. What would your angel do
4. Moon water
5. Petey
6. Dance of the luminous crone
7. Through the looking Glass


It is also worth noting that as I approached the venue I met Kristin (ThunderQueen). She plays drums in Warhorses. Even though I had to work at 6am I needed to see some of their set - and I'm glad that I did. They were very theatrical and brought wonderful stage energy. The guitarist had lots of chops that grabbed my ear. I need to dig in more to this band. I feel like an ass writing such a short bit on such a cool group. But hopefully "More will be revealed.

The 2nd band that played was Dr. Wolf's Cult of Kings. They played a Ween cover of Tried and True. They were more of a jam band. I enjyoed their set quite a bit. I also heard them mention Marquette. Since I lived there for 5 years late youth I had to pay a little extra attention based on that. There was some intense soloing and one of the guitar players broke the thick E string. I don't see that often. That comes from playing your ass off of course.

I haven't been to as many local/indie shows since the pandemic. This is proof that I need to do this more. Especially when I can enjoy the whole night and not work. I had an amazing time. 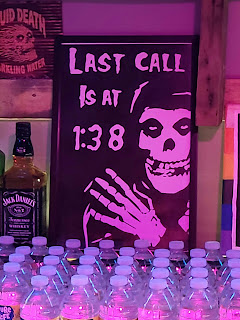 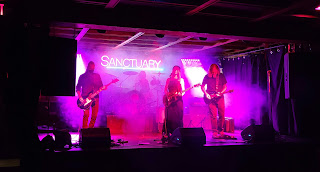 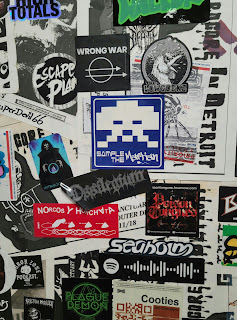 Posted by Sample the Martian at 9:39 AM