PS4 to PS5 data tranfer over Wi-Fi was about 2 MB per second. Yes. That slow. PS4 to PS5 data tranfer over LAN is about 100 MB per second. 188 GB in like thirty something minutes. That's MBps not Mbps. I connected my PS4 to PS5 with an a Ethernet (Cat-5) cable. No additional configuration was needed. Plug and go. Now to figure out how to upgrade my storage oh my PS5. 1TB is nowhere near enough. If anyone knows what the SSD TBW specs are for the PS5 shoot me a line. Please. I'm posting this both for myself to have as future reference and for anyone else who might search for this.
Posted by Sample the Martian at 3:42 PM No comments:

Some stuff for twenty - twenty.

Its been a while since I've posed. It has been a long year. I made the decision to divorce shortly after my last post. Between moving and stress and all of that I've been redefining who I am in a lot of ways. Music is still at the heart of my heart along with my kids.

I a new song to the Bandcamp song a while back but haven't noted it on this website. Its called Robot.exe. It has some of my favorite lyrics and a chorus that is one of my catchiest ever. I have other stuff I want/need to post. The remainder of this year will be pretty difficult at work but with COVID - I've played a lot more music at home. I've been doing some songwriting too. I hope to share some of that with you all soon.

Posted by Sample the Martian at 8:57 AM No comments:

The concept behind what I'm doing here is to start with some songs that are fully written . . . but still need some production. I'm going to upload demos from 27 different songs that I've been working on over the years. Some of them will get polished and will become B-sides. Others will become songs that end up on the next record. Now that the technology exists - its really easy for me to upload and replace a demo with a newer version. So - if you are listening deep like many of you do - you'll get to hear the changes between versions and see the evolution and how I get to a final version of a song.
So - with bandcamp - if you are to purchase now - you'll have access to all 27 demos and their evolved replacements as they happen.

The older replaced versions might not always be available via bandcamp - so if you like something and get attached to it - download it. . . or at the very least make note of the date code if you need to hit me up for it later.

What I'm hoping to do - is take any of the proceeds that I do get and use them to either fund new merch or some software plugins that I'll use for mixing and advanced production.

~eMpyre ramireX
Posted by Sample the Martian at 11:07 AM No comments: 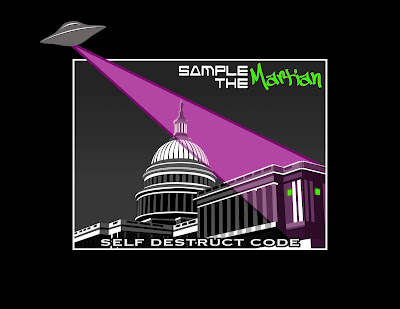 Posted by Sample the Martian at 5:34 PM No comments:

What does "I'm Back" even mean?

I know that some people don't use Facebook and that is where I post most of my news and happenings. In the years since my last release I've gotten married, had 2 kids and earned a Master's Degree. Now that school is done I've been working on new material. I have 7 songs that are mostly written. Most of them only need a little bit of recording and then some mixing to be finished. I'm not 100% sure how I'll release them but I would expect to hear at least 1 of the tracks by the end of January. A long time ago one of my co-workers and I used to joke that all rappers feel the need to announce that they are "back" on each album . . . I don't think I've mentioned it in any of my songs. . . but it's still worth joking about considering the roads I've taken between releases. Its been a challenge to stay focused and continue writing and creating. I might beat Tool though - at least there is that.
Posted by Sample the Martian at 11:12 AM No comments:

Kovax - The One You Shall Not Sleep On

As some of you have noticed - I've been noticeably absent from releasing new music. A lot has happened in the last few years. Marriage, children, and the thing that makes it the most challenging is working on my Master's Degree. I have about 9 months until I finish. . . and then its on. In the meantime however I have been working with Kovax (a local Detroit MONSTER) to help bring him to the next level. . . actually I'm thinking double promotion here and getting him to the level beyond that as well.

I've met and listened to hundreds of independent artists over the last few decades and every now and then someone will strike me as being a few notches better than all the rest. Usually they are missing something . . . but this dude has it ALL. He has the drive, work ethic, talent and he is willing to learn new parts of the business. He's performed to large crowds and he's one of the best stage performers that I've ever seen. I've seen him evolve musically over almost a decade now and he's continually changing things up while still keeping his deliveries full of energy and wit.

Definitely check out these 2 albums. He has another one dropping towards the end of the year. On Catching Energies Bare Mitts and Die in Detroit on Feral are some of my favorites. . .but honestly both albums are strong from front to back. They are available on Amazon, iTunes, Apple Music, Spotify and plenty of other outlets.
Kovax: Feral

Posted by Sample the Martian at 5:23 AM No comments:

The most important thing first - my kick pedal trigger works fine with RB4. Like I said in my last post...I did purchase the Rock Band 4 Bundle. I have been using my RB1 drum-set though. I've been having issues with my RB4 Drum- Kit. I've tried many things to get it to work and currently I'm waiting for a response from Mad Catz.

So first the good stuff. I love Rock Band 4. It combines some of the wonderful stuff from Rock Band 1, 2 and 3. The guitar is much more responsive than the previous Rock Band Guitars. I don't play guitar nearly as much as drums but I had no problem playing on Expert on Bass and Guitar. I also did some vocals. Again not my prime instrument but as a test drive I think the vocals were what I would expect them to be.

The soundtrack is everything I wanted it to be. When I saw the track list I was worried because I wasn't familiar with a lot of the songs. When I played through the RB4 Soundtrack though I enjoyed every single song. Harmonix was not exaggerating when they said, "Top Tier Soundtrack." I was surprised how much I enjoyed the U2 songs. From a drummer's standpoint the songs were mostly more challenging than the other songs in their tiers but not terribly so. Where this is good is that Harmonix chose songs that you wouldn't play through once and Gold Star or FC (Full Combo) easily. They all have rhythms and patterns that are new and make the game fresh and enjoyable again. Standouts to me were both U2 songs, No One Like You by the Scorpions, Panama by Van Halen, The One I Love by REM, Friday I'm in Love by The Cure, Lazaretto by Jack White, Uptown Funk, Brandi Carlie, Cake, Avenged Sevenfold, The Protomen, 4 Non Blondes...and I could go on. My personal opinion is that it would be extremely difficult to come up with a mind-blowing set-list that would satisfy everyone. With all of the great songs available in previous games and in DLC there isn't a lot to choose from outside of new songs that were released in-between Rock Band 3 and 4. The DLC is reasonably priced and there is something there for any music lover. The new features are split for me. I love the dynamic drum fills. It makes learning the song more interesting. It also makes a full combo far more rewarding. I didn't get a chance to try out the freestyle vocals. I personally didn't like the Freestyle Guitar Solos but I just turned them off. You can also easily turn off dynamic drum fills and freestyle guitar solos. By the time I got my game up and running I was able to get the RB3 Export. I also had no problems getting my previously purchased DLC. There are some DLC songs that haven't been ported over to RB4 yet but they are working on them. They are releasing legacy DLC, Track Packs and Exports at a very reasonable rate.

Some people complain that the game was released only partially completed. I'd rather have the game that came out at release with regular updates now than have to wait even longer to get a completed game. The updates are free and to me the updates keep the game fresh which in my opinion will help the longevity of the franchise.

As far as "missing features" 2 out of 3 of them are in development. They are Practice Mode, Set-lists and Online Play. With RB2 and 3 I think I only used online play once or twice. No big loss for me but I'd love to have it. There is still new DLC coming out in regular intervals and there are almost 1700 DLC songs available today for RB4. That with any of the export packs that might have been purchased is a daunting amount of material to try and conquer.

So my TLDR review is: Rock Band 4 continues rocking and it rocks well!

I've also contacted Harmonix Customer service. . .and truly they are amazing. Mad Catz still remains to be seen. More on that later. The Harmonix folk are very enthusiastic about Rock Band and that makes me want to support the franchise until I am too old to play. Hopefully that never happens.

Posted by Sample the Martian at 12:30 PM No comments: